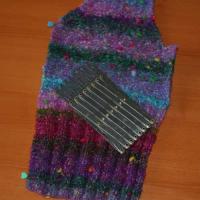 I’m still plugging away at my various projects.  It’s Eloise’s turn now.  This project was stalled at one point because it was time to measure for the buttons and buttonholes.  I generally think it’s a sign of poorly written knitting instructions when you are directed to measure the placement of your buttonholes.  You know, the pattern says the first button is 1/2″ below the neck shaping and the last one is 3/4″ above the cast on edge and remaining button(s) should be spaced evenly between them.  Even worse is when instructions say, 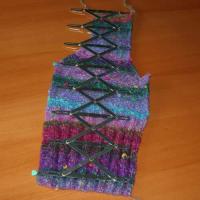 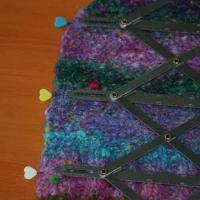 Even though I don’t like instructions like that, I must confess that I’ve been waiting to use my handy dandy tool for measuring the distance between buttonholes.  I received it as a door prize at a Guild event a few years ago. 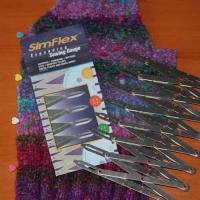 It’s called an Expanding Sewing Gauge and it opens like an accordian to establish equidistant measurements. After I marked the first and last button positions with pins I just layed it over the cardigan front and expanded it until the first and fifth indicators were pointing at the two pins.  It can be used for pleats, smocking, drapes, shirring and of course, buttonholes.  I must say, I’m really happy with how easy it was to use.  As easy as … 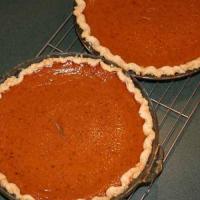 PIE!  We celebrated Thanksgiving with family this weekend and I baked the pumpkin pies and made the Waldorf Salad.