Where or where can it be?? I can’t find the yarn I so neatly washed and reskeined to complete my Tangled Yoke sleeve. I must have put it “away” when I tidied up a bit before company came over. There are only so many places where I can ferret away yarn and I keep looking in all the same places. Nothing! 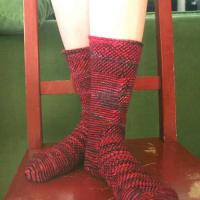 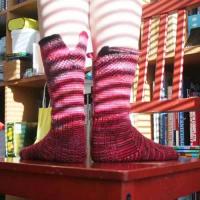 In the meantime (I mean, it has to show up eventually, right?) I’ve been working on a couple of other things and finishing off a project or two. I now have a completed pair of Bartholomew’s Tantalizing Socks–a Cat Bordhi design from New Pathways for Sock Knitters

yarn: Fleece Artist Merino 2/6 purchased as a “socks seconds” at Beehive in Victoria
needles: 2.5 mm Addi Turbo magic loop, so I wouldn’t loose a needle while knitting in the stands at the skating arena (instead, I dropped the ball of yarn under the bleachers, more than once!) 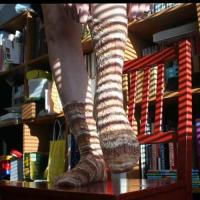 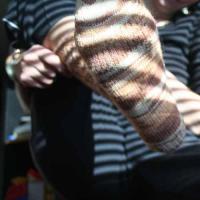 All I had left to do on these socks was one grafted toe. They languished in my knitting basket for well over a year–probably two years. I use this pattern as an example of a stitch pattern that probably doesn’t benefit from being knit with a self-patterning yarn. Between the colours and stripes in the yarn you just can’t see the intricate lace pattern–too much effort for minimized visual impact.

Project specs
pattern: Eagle’s Flight by Megan Humphrey, free pattern
yarn: Opal Rainforest in the Owl colourway
adaptations: I wanted to try to reinforce the ball of the foot using the slip stitch pattern that is generally on the heel flap. It has a very different row gauge than the lace pattern and the toes kind of curl around towards the sole although they don’t look too bad on the foot. Only time will tell if they hold up to wear better than the average handknit sock.

One thought on “Lost”