So a couple days after I gave both Carmen and Mechelle their gloves they happened to both be on the 99 B line bus.  Imagine Mechelle’s surprise when she sat down and saw *her* gloves on someone else’s hands across the isle.  Mechelle and Carmen don’t know one another but they did know I was making gloves for two of my friends.  Naturally she said something to Carmen and they had a good laugh over the gloves.  Since I wasn’t on the bus with them to get a picture of their gloves together, we’ll have to content ourselves with one of me and Devan fooling around while wearing our gloves. 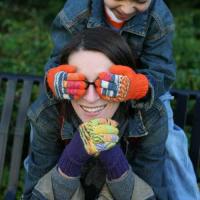 I tried telling my husband this story and he said, oh they were probably just similar.  They couldn’t have been the same gloves.  There are lots of gloves out there like that.  … He just didn’t get it.  There are only three pairs of gloves like this out there (so far!) in this rather distinctive colourway and I knit all three pairs.

If you want to knit these gloves in this colourway, I have enough for a couple of kits.  You get two 100 g balls of yarn (easily enough for four pairs of gloves – depending on size) plus the pattern for $40 CAD.  For $45 CAD I’ll include an Annie’s Mittens pattern so you can make both the gloves and the mittens.  Email me at info AT holliyeoh DOT com if you’re interested.

One thought on “Glove Twins”