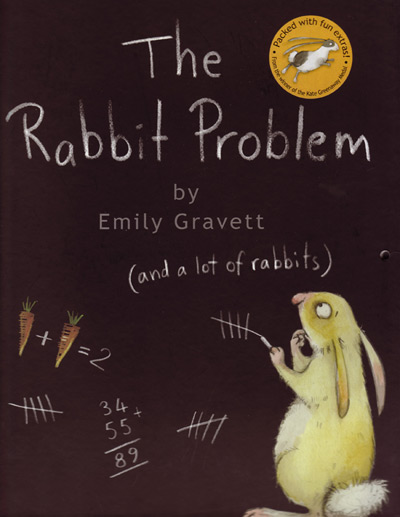 In the 13th century, mathematician Fibonacci popularized what later became known as the Fibonacci sequence of numbers: each number is the sum of the previous two numbers, starting with 0 and 1. This sequence begins 0, 1, 1, 2, 3, 5, 8, 13, 21, 34, 55, 89, 144, and so on. Fibonacci expounded on this concept with an example of rabbit reproduction. Children’s author Emily Gravett used this premise for her humorous book called The Rabbit Problem. Set out like a wall calendar, each month gets hairier with the rabbits’ antics for surviving in their field and read more

Shall I Knit You a Hat? – Children’s Book 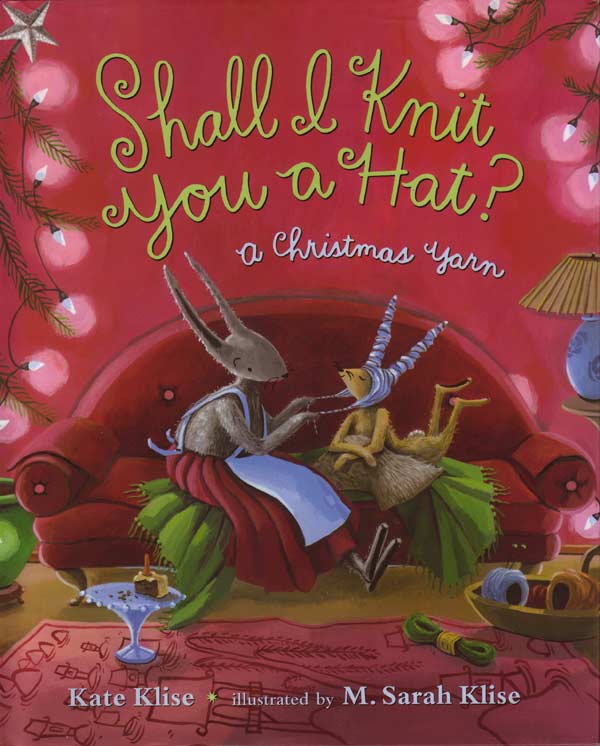 Just in time for the season, a sweet Christmas read about a little rabbit’s DIY approach to gift giving. Shall I Knit You a Hat? is “a Christmas yarn” written by Kate Klise and illustrated by her sister, Sarah Klise. Mother Rabbit hears about a big blizzard coming on Christmas Eve and Little Rabbit asks her to knit him a hat to keep his ears warm. read more 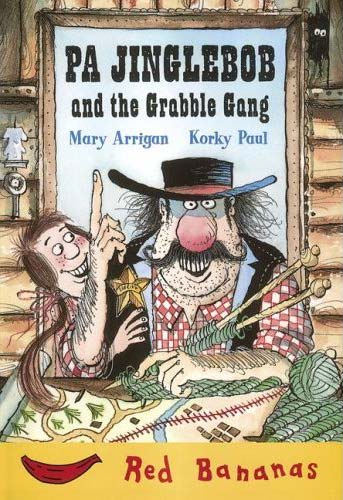 Devan and I were thrilled to find another Pa Jinglebob book at the library. Our favourite knitting sheriff is back. Both books are a delightful introduction to chapter books for any child in a fibre-minded family. Pa Jinglebob is a sheriff in a frontier town who whittles his own knitting needles. Knittin’? … I ain’t ever seen a knittin’ sheriff. Grandma Tendercorns needs his help, but she’s not quite sure he’s the man for the job. I’d never trust a man with knittin’ needles. Big sissy. This time the villain threatening the town of Buckaroo isn’t a bandit. read more 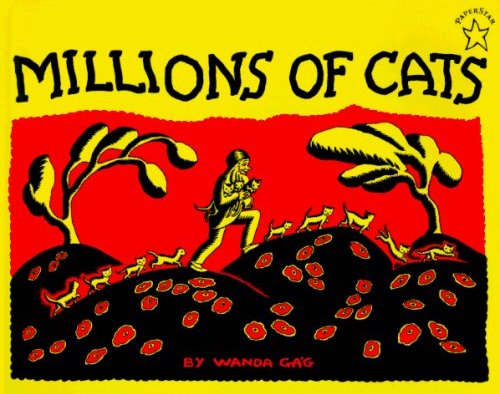 My Mum was a children’s school librarian and she has introduced me to many books, as you can imagine. One of her favourites to read aloud to her students was Millions of Cats. Upon rereading this book with Devan when he was little, I was thrilled to find an illustration of the very old woman knitting a toe-up sock on what appears to be six dpns. I imagine Wanda Gág, who both wrote and illustrated the book was not a knitter, but I was pleased none-the-less to see knitting in the book. The story is read more 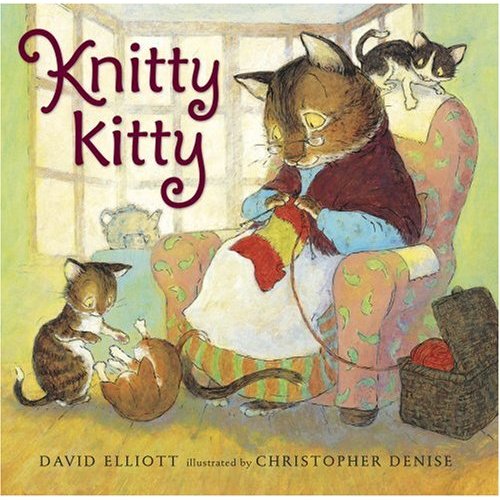 Even though Devan is no longer a little boy, I still like to browse the picture book shelves when we visit the library. Sometimes I turn up real treasures. Here’s one I hadn’t seen before—naturally it features knitting. In Knitty Kitty, alliteration and onomatopoeia are used to recreate the comforting sounds of knitting. Tickety-tick. Clickety-click. Knitty Kitty sits and knits. The charming illustrations really capture the adorable antics of the kittens. Knitty Kitty keeps her kittens cozy, toasty and comfy but the mischievous little kittens have other ideas. They share their mittens, hat and scarf with the happy snowman outside. read more

Pa Jinglebob is a gruff, surly sheriff in a rough western town. He’s also a single dad and … a knitter. The town’s folk grumbled, What a joke! A sheriff who knits woolly sweaters? Whoever heard of a knitting sheriff? Big sissy knitting sheriff … When bandits come to town and all Pa Jinglebob does is knit, the townsfolk get quite frustrated. Only they don’t know that the sheriff has a plan. Pa Jinglebob manages to capture the bandits and keep the peace with his knitting. His proud read more 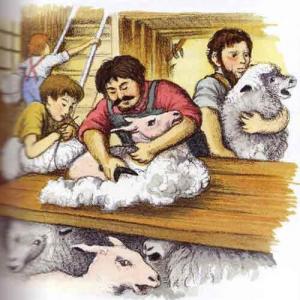 Farmer Boy by Laura Ingalls Wilder has so many wonderful fibre references in it. Time to share another one. It was time to shear sheep. … and they drove the sheep down to the washing-pens. …Almanzo took hold of a woolly sheep and pushed it through one gate. … the sheep struggled and kicked and yelled. But the men rubbed their wool full of brown soft-soap and dragged them into the deep water. There the sheep had to swim. The men stood waist-deep in the swift water, and held on to the sheep read more

Devan and I have been reading Farmer Boy by Laura Ingalls Wilder. Although I read this book as a child, I had forgotten about all the amazing references to the textile arts—a necessity in the 1800s. Wilder tells the story of the day to day life of a nine-year-old farm boy and his family. In addition to plowing the fields, planting potatoes and breaking calves, the reader gets lessons in weaving, knitting, dyeing and sewing. I particularly enjoyed the description of how the young boy’s clothes were made by his mother. … but inside his good woolen clothes he read more 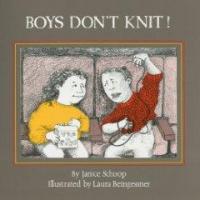 I’ve been searching for the children’s book, Boys Don’t Knit! by Janice Schoop for some time. My little boy is starting to be influenced by the boys at school and he often classifies activities as boys’ or girls’ activities. This book helps to break down those barriers. Marvin doesn’t like the handknit sweater his Grandma made for him. It’s itchy and it’s bright red. When he accidentally unravels it by pulling on a loose strand he panics. His best friend, Elsa tells him that read more 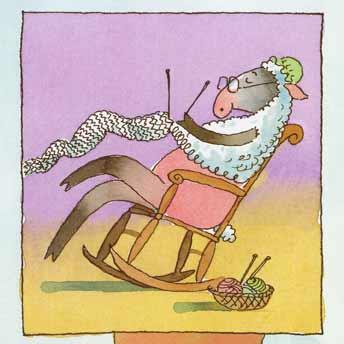 Here’s a witty book of children’s poems all about wool, sheep and their antics. Wool Gathering: A  Sheep Family Reunion poems by Lisa Wheeler and illustrated by Frank Ansley One poem in particular should resonate with knitters. Aunt Eweginia is about a ewe who loves knitting and she knits the fleece right off of her body. Ewe mustn’t watch, Ewe see, that’s rude. Eweginia knits till she is nude. Although published in 2001, the book is still available. You should also be able to find it at your local library, which is read more