Pa Jinglebob is a gruff, surly sheriff in a rough western town. He’s also a single dad and … a knitter. The town’s folk grumbled, What a joke! A sheriff who knits woolly sweaters? Whoever heard of a knitting sheriff? Big sissy knitting sheriff … When bandits come to town and all Pa Jinglebob does is knit, the townsfolk get quite frustrated. Only they don’t know that the sheriff has a plan. Pa Jinglebob manages to capture the bandits and keep the peace with his knitting. His proud read more 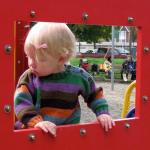 How many designs are safe to juggle at the same time? I’m working on three sweaters I designed some time ago for Skacel (those pictures are of my original samples). The rights have reverted back to me so now I’m permitted to publish them. But first, I want to tweak them with a few little design elements to make them even better and I’ll offer them in a wider range of sizes. To this end I’ve been playing with three different spreadsheets to get the stitch counts just read more 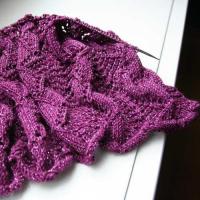 This was the first time in three years I didn’t participate in the Knit-Out market as part of Victoria’s FibreFest celebrations. It’s always such a mad rush to squeeze everything into the car, hope for a spot on the ferry, live out of a hotel or on a friend’s couch and then hope for fair weather. Even when it doesn’t rain, the wind at Saxe Point Park always makes having a tent setup and display challenging. One year my tent actually became airborne while rain blew in sideways. It’s not fun taking damp yarn and read more

My little boy loves video games—what 8-yr-old doesn’t? Here’s one I think I could get into. Just watch the trailer and see if you’re not intrigued. Devan’s comments when I showed him the video: That’s really cute! [The use of crafty materials] makes the game have more adventure. We should get that game. We really should. I mean it! What’s awesome about it is you pull the yarn and the stuff around it shrinks and you can jump to between sections. Devan was also intrigued by the use of buttons, gathers, stitches and the yarn lasso. I particularly like the read more 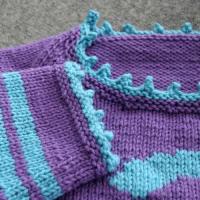 You just can’t have a Picot Cast-On tutorial without a Picot Bind-Off one. So, it’s time for another tutorial. This bind off nicely mirrors the look of the picot cast-on used in the birthday sweaters (One! Two! Three! and Four! Five! Six!). When you get to the point where you would like to place a picot bump on your bind off edging, slip read more

Procrastination seems to reach its height (for me) when it  comes to sewing on buttons. I was worried that by the time I finished Miss BB the weather would be sunny and warm and I would have to put this cozy cardigan away until the fall. Well that certainly hasn’t been the case. Project Stats Pattern: Miss BB by Bonne Marie Burns of Chic Knits Yarn: Nashua Handknits Creative Focus Superwash in charcoal (29) I am disappointed with the read more

It’s so rewarding teaching needlecrafts to kids. The school year is almost over and I’ve just finished up the classes. Interestingly the crochet classes were the most popular. We crocheted slippers (for which I don’t have a picture!), hearts, Valentine envelopes, hacky sacs and critters. Looking back I think there was only one knitting class this year. Huh. The kids made little backpacks and learned how to knit i-cord for the straps. I’m looking forward to read more